Edit
watch 01:36
We're Getting Mutants in the MCU - The Loop
Do you like this video?
Play Sound

God's Blessing on This Wonderful World!: Legend of Crimson

Konosuba 2 OVA
God's Blessing on This Wonderful World!: Legend of Crimson (この素晴らしい世界に祝福を！紅伝説, Kono Subarashii Sekai ni Shukufuku wo!: Kurenai Densetsu) is a movie produced by J.C. Staff of the Konosuba anime. Reprising the main cast and director as well as much of the key production staff, the movie aired in Japanese theaters on August 30. It would later be screened in select theaters in Western countries over the months of November and October, and premiered for two days on November 12 and 14 in theaters across the US courtesy of Fathom Events.

Covering the events of the fifth light novel, the movie begins with an explosion in the distance. Kazuma, Darkness, Aqua, and Megumin return in shame to the Adventurer's Guild after having wiped out large quantities of fish that the adventurers loved. Kazuma is also shamed by several women nearby as a pervert, and becomes depressed until Yunyun arrives and asks to bear his child.

Everyone returns to Kazuma's Mansion, where Kazuma himself is quite excited, but Megumin and Darkness insist on questioning why Yunyun wants Kazuma's child. They discover that a note from her father claimed the entire Crimson Magic Village had been wiped out, and that only a son between Yunyun and a "lowly" adventurer could avenge them. They figure out that the latter portion was falsified, and so Yunyun returns to the Village, much to Kazuma's consternation.

Later, Megumin decides to check in on the village as well, so Wiz teleports them most of the way there. Unfortunately, they land near a gathering of female Orcs, who chase down and molest Kazuma until Yunyun arrives to free him. Continuing on to the village, they encounter several goblins and other creatures, being discovered due to Kazuma loudly demanding to know where Yunyun's "tattoo" is and due to Yunyun and Megumin arguing.

Megumin quickly casts explosion, wiping out the first wave, but another horde arrives and is only stopped by several Crimson Magic Clan members who saw the explosion and arrived to help. Afterward the party finally reaches the village, only to find it perfectly intact; Yunyun's father had grossly exaggerated the danger. Despite Sylvia being present and attacking, the Crimson Magic Clan's magic easily repelled them.

Finally arriving at Megumin's home, Komekko welcomes them and Megumin's poor parents quickly take an interest in Kazuma, who "lives in a mansion" and has more wealth expected. Yuiyui, Megumin's mother, soon locks Kazuma in Megumin's room in the hopes that Kazuma would make a move. However, Megumin tricks Kazuma into admitting his desire, and she runs away via a window to Yunyun's house. The next day Yuiyui traps them in the room again, this time with the window frozen over with magic. Kazuma gets Megumin to calm down and share the bedding. To Kazuma's surprise, Megumin willingly cuddles with him; having learned from the previous night, he decides to let Megumin make a move this time.

Sylvia attacks again, capturing Kazuma outside Megumin's house, but Kazuma is initially quite happy resting his head and inhaling deeply between Sylvia's breasts. When he realizes that Sylvia is a hermaphrodite however, he panics, but is still successfully kidnapped and brought to an old ruin. There Sylvia hopes to access a "Mage-Killer" power, and Kazuma traps her inside. She finds the power inside however, and everyone flees as she expands into a several story tall snake-like being and goes on a rampage.

Unable to stop her, Kazuma finds a counter-weapon, the "Railgun (TBD)", built by a scientist who died and came to that world as well. Initially it does not work, until Megumin uses explosion magic to charge it, at which point Komekko uses it to kill Sylvia. In the afterlife, Sylvia encounters Beldia and Hans, and the three of them resurrect and return to the world of the living as a unified monstrosity.

With the Crimson Magic Clan cut off from their magic by Sylvia, Wiz and Vanir arrive to hold the new creature at bay. Overmatched, Wiz retreats to the villagers while Vanir possesses Darkness, holding it off until Kazuma could reach out to Sylvia. While Kazuma professed his love for Sylvia, Wiz drew together the magic of the villagers to send to Megumin and Yunyun, who used combined magic to defeat Sylvia, killing Kazuma in the process.

Kazuma comes back to life (again) and has a picnic with his party. There, Megumin apologizes for only having one ability, and offers to reallocate her points to learn different magic spells. However, Kazuma puts her points into even more powerful explosion magic, and when Megumin next casts the spell it is nearly nuclear in scale. The resulting mushroom cloud is in the shape of a heart. 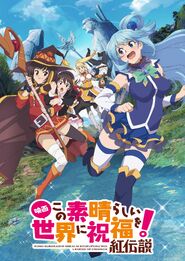 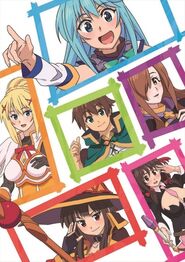 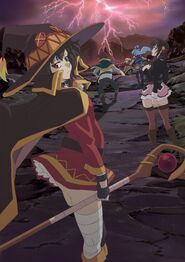 Differences between Movie and Light Novel[]

Community content is available under CC-BY-SA unless otherwise noted.
Advertisement